In March 2021 Shape, a new Quebecer hard seltzer brand appeared on an already busy market saturated by local and international players, with 75% of the market already held by competitor White Claw. The remaining 25% was shared between brands such as Beach Day Every Day, Taïga Seltzer, Vizzy Seltzer, Oshlag Seltzer and Kamouraska Vodka amongst others. 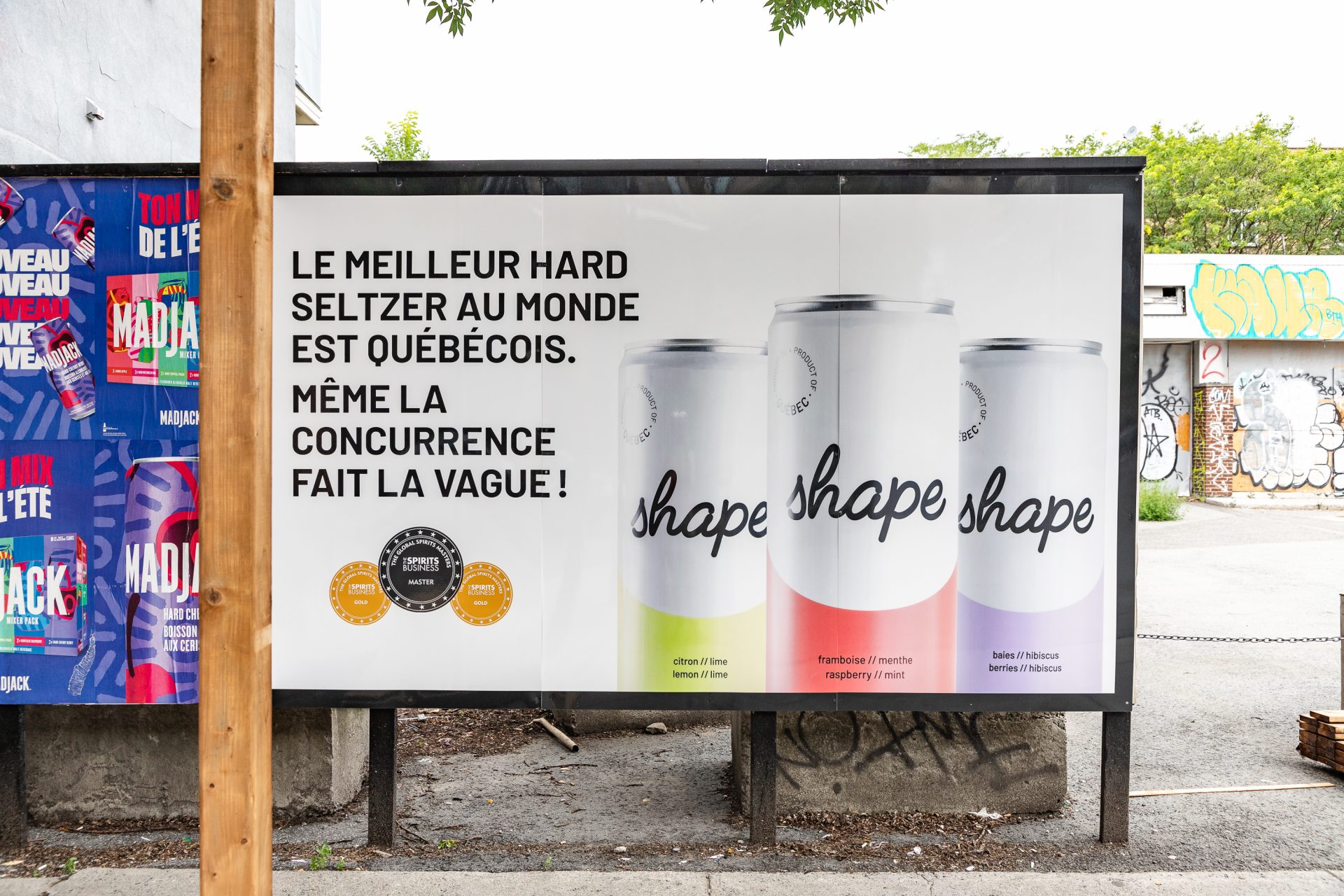 After 2 years of pandemic we’ve truly realised the importance of human contact. With the relaxation of hygiene measures around Spring 2021, parks saw a huge spike in use – around 94%. Consumption of ready-to-drink beverages such as Shape was perfectly suited to this situation as people started meeting friends and going on dates again.

In order to ensure the purchase and repurchase of Shape throughout the summer, we opted for a strategy of contextualisation- the increase in park use during the pandemic- whilst focussing on geolocation to help increase and vary the points of contact along consumers’ shopping journeys.

We ran an integrated campaign creating multiple points of contact along the course of the consumers’ shopping journey in order to promote the purchase of Shape at various opportune moments, taking advantage of:

Our choice of media was not random. Everything was based on the media consumption habits of the target audience as well as the behavioural habits of Quebec residents. This allowed us to maximise the visibility of the brand in digital environments and areas frequented by those likely to enjoy Shape. The ads took 3 forms –  digital out-of-home advertising within a radius of 500m of participating grocery stores, fly posting on streets with high pedestrian footfall, and in bus shelters within a 250m radius of the parks of Montreal. Ads in Facebook and Instagram feeds and stories, as well as impact formats on Grindr, and audio ads on Spotify completed the campaign to help ensure brand recall, and direct consumers to points of sale.

In order to ensure a synergy between the different media and to increase repetition and therefore recall of the brand, the same visual was used across Instagram, Facebook, Spotify and on the 3 types of display ads. Only Grindr was different- to align with the app’s sassy vibe we asked: ‘Do you want to see my six-pack..?’ along with a picture of a 6-pack of Shape held by a man with his back to us. An organic influencer campaign also took place alongside our efforts and so we decided to use the influencers’ photos on Instagram as one final push towards brand recall among 18-34 year-olds.

Shape/ Club Local was its first ever multimedia campaign of this magnitude. The clients were able to observe the performance of various media and platforms (billboards, Spotify, Grindr…) for the first time, allowing them to establish benchmarks for future campaigns. The media mix for this campaign helped surpass our fixed objectives, making Shape the bestselling Quebecois hard seltzer in Quebec, in its first year on the shelves. 4 million people were reached across the region and 53 impressions were generated (up 34% in comparison with pre-campaign estimates) with an average repetition of 4 as well as over 10,000 ad interactions (saves, shares comments, likes etc.) The catchy tagline ‘even the competition is waving’ – an obvious nod to the brand White Claw for any hard-seltzer drinker, seemed to go down very well amongst consumers. The influencer campaign which unfolded alongside generated 2.8 million extra impressions and 42,000 interactions – 38,172 likes and 3,869 comments. Finally there were 1,005 mentions of the brand across 316 publications and 661 stories and 28 reels published by 200 nano-influencers throughout the region. All this contributed to a level of engagement of 6%, of objective achievement of 126%, and an increase of 93% in Shape followers on instagram.

Shape became the bestselling Quebecois hard seltzer in Quebec in its first year on the shelves.

Quebecois were reached across the region with surprising frequency given budgetary constraints.

Stay up to speed with new developments in digital marketing. Check out our blog and subscribe to our newsletter.

Are you passionate about digital marketing? Realize your full potential by joining our team.